I’ll be honest, my mind is too scrambled to write a decent and thorough post. And for the sake of black mental health, I won’t share the video of Alton Sterling … but I had to spread more awareness and what better way then voicing this on my blog.

It hurts. Literally this shit fucking hurts. We have added another name to the roster. His name was Alton Sterling from Louisiana who was shot multiple times, point blank range for selling CD’s. All I can think is ‘when will this stop’. When will they stop killing us! This man leaves behind a wife and children. And while I won’t share the horrific video of his death, I will share this video so that you all may see what impact this has had on his eldest son.

The time for a revolution is now! We are strong and powerful beyond measure. And what I love is that a majority of this generation are woke AF and know exactly what needs to be done. We are bigger than this. We will make it through this pain. But we have to be willing to fight and fight hard. 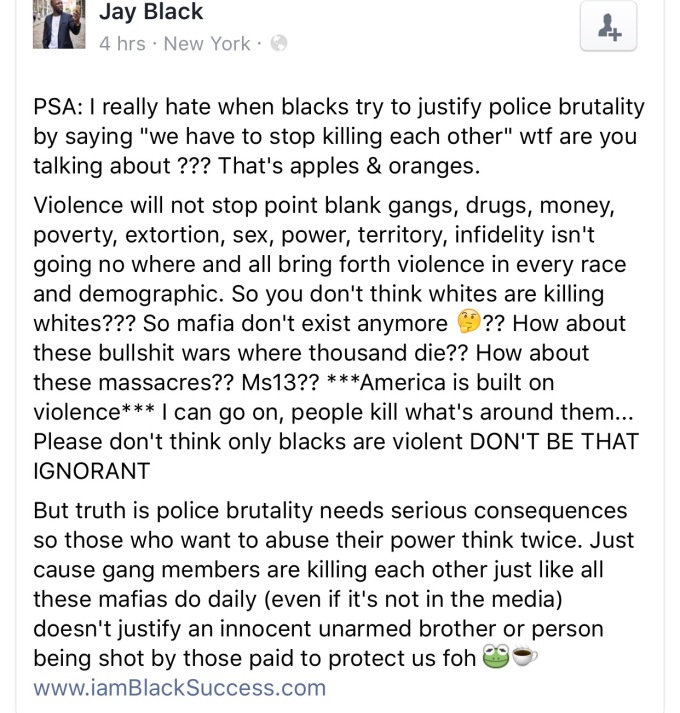 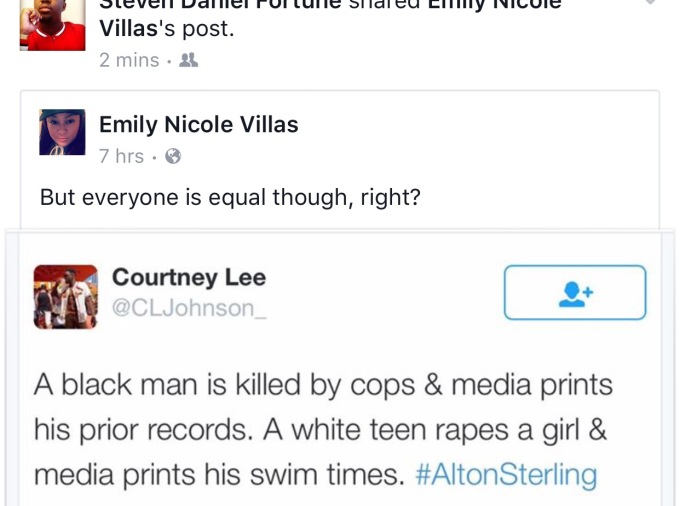 With that being said, today I stand in solidarity. With my black brothers and sisters who know what it’s like to wake up everyday and be angry because we have to fight 10 times as hard to get half the respect & reach half the success. I stand with my darker skinned brothers and sisters that feel that anger 10 times over. I stand with my lighter skinned folk who get denied a right to their blackness. I stand with my Latinos who acknowledge that their roots are just as (if not more) embedded in Africa as they are in Spain & Arawaks and understand that this affects them too. For my Afro Latinos and other non-white Latinos who are often forgotten about by both their cultures who have to fight just as hard as my black brothers and sisters. I stand with my Muslim brothers and sisters because while I am not demonized for my religion, I understand being demonized based on something that you cannot control & on a daily basis. I also stand with all Middle Easterns that aren’t even Muslim but are continually blamed for the doings of a group that does not represent them nor Muslims. I stand with non white immigrants who were misinformed about this country and came here seeking a better life only to be persecuted, humiliated & demonized for trying to better themselves. I stand in solidarity with all indigenous and Native people because you are too often left out of this conversation. Smh, I stand in solidarity with black sisters because we are continuously the forefront of a movement that sometimes doesn’t defend/protect us and its draining and hard. I stand with my sisters of color because we have to raise our men to do so much and be so much and whilst doing so we battle so damn much -prison, drugs, gangs and death. I stand with black men because many of you don’t receive the credit you deserve. You are strong, resilient and ever so powerful. I stand with my people of color because it is time that we reclaim what is ours.
Get educated. Educated others. Our time is now!